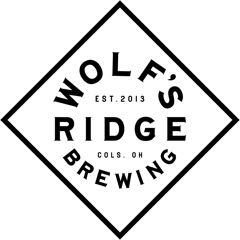 Wolf’s Ridge Brewing is a family owned and operated craft brewery and restaurant, created as a result of a long and deepening love for both craft beer and food. Wolf’s Ridge Brewing was born through the deep desire of the owners to create a gathering space for other craft beer and food lovers in the downtown columbus community. their goal is to build a microbrewery and restaurant that becomes a proud member of the community, where they provide patrons with a wonderful dining and drinking experience.
the concept is centered on the idea that by focusing on craft and locally sourced products as much as possible, they are staying true to a primary goal of supporting and emulating the community in which they reside.
the restaurant began serving One Line Coffee in October of 2013 as part of its commitment to source products locally. The menu includes batch-brewed coffee as well as espresso…ask about their beer selection and the beers that contain an origin coffee from One Line!